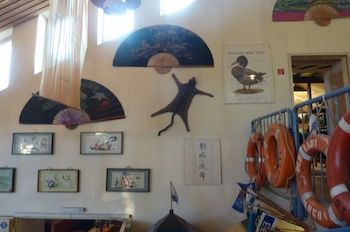 Schatzkiste  0  24.June.2019
He?s climbing up the wall in our large entry hall as though he were still trying to escape the hunter whose bullet found him ? this ocelot from South America. Framed exotic plants from Asia are blooming beneath him, and large Japanese fans spread out above him like the protecting crowns of primeval trees. But whatever brought him here?

This much we know: a young German seaman discovered the ocelot fur in a South American port and probably spent most of his pay to obtain it. For decades, he enjoyed its company. The seaman later became a captain, and also a member of the seaman?s mission. When the DUCKDALBEN annexe was completed at the end of 1995 and the empty walls offered lots of place for displaying treasures, the captain, who was by now retired, decided to part with his ocelot fur and gave it to the seamen?s club.

By this time ocelots had already been listed in Appendix I of the Washington Convention on International Trade in Engendered Species from 1989. The convention forbids, among other things, all trade with products that have been made from ocelots, including the private buying and selling of used objects. DUCKDALBEN director Jan Oltmanns therefore got in touch with customs authorities. But since ?our? ocelot had been in our possession long before the convention went into effect, officials had no problems with our displaying the animal.

A note for all those who use the perfume ?Obsession?: scientists in a nature sanctuary in Southern Texas had difficulties in finding the few ocelots living in the region. They laid out all kinds of scents to attract the animals, but not a single one showed itself. So it was a fortunate coincidence for the scientist who had applied the men?s perfume when an ocelot tried to rub himself against the man to take on more of the scent. From then on, scientists knew that ocelots love Obsession, and they now use the perfume in an attempt to increase the number of ocelots living in this protected area. (Source: Internet)