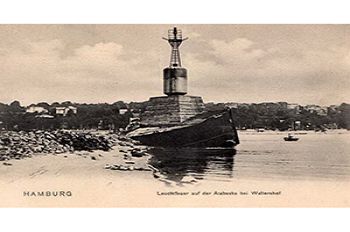 Olaf  Club  0  31.August.2016
October 7th 1891: The English steamer Athabasca is sailing up the Elbe in the darkness and under poor visibility. Coming from Rangoon, her cargo consists of rice and a large number of apes who were destined for the Citizens? Zoological Gardens in Dammtor, Hamburg. The ship runs aground in the swampy Böhnhasensand across from the Övelgönne section of the city.

The 90-meter long steamer floats free on the next flood tide, but the onrushing water pushes her crosswise across the river channel. The Sloman steamer Procida collides with the Athabasca, whose boiler and machine rooms take on so much water that the ship soon sinks. No human lives are lost, but the apes drown miserably. When attempting to salvage the Athabasca, she breaks up into two parts which are towed out of the channel and run onto the beach. The shipping hazard is marked with a beacon light. And when the port facilities were later expanded, the vessel?s remains disappear beneath the Elbe sand.

In 1993, the present-day Burchardkai Terminal is built as part of a port expansion for container handling. The remaining parts of the Athabasca are recovered from the river bottom; pieces of the wreck are presented to the Hamburg Museum, and DUCKDALBEN is also given a rivet from the Athabasca ? truly a historical treasure, buried beneath the Elbe for 102 years. It?s now hanging on the wall between the entrance and billiard room, surrounded by other treasures.

The Elbe channel is now deeply dredged, and giant container vessels load and offload their cargoes where the Athabasca once stranded. Only the name ?Athabaska-Kai? is a testimonial to the location of this historical maritime accident.