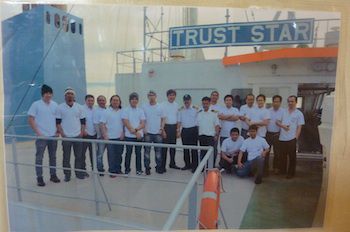 Olaf  Club  0  31.August.2016
One spring evening in 2015, some crewmembers from the MV Trust Star came to DUCKDALBEN. Several of them had never been to the club before but they soon felt right at home, enjoying the atmosphere and admiring the many ?treasures?? in all our rooms. When it came time to go back to their vessel, they didn?t want to say goodbye without leaving a present from their crew.
The club?s duty manager offered to take a photo of the crewmembers which we could immediately print out on our printer, but they didn?t think that was a good idea ? only part of the crew would have been on the photograph. They felt that all the crew had to be included.
Shortly before the ship was due to sail the next day, they stopped by and brought a USB stick containing a group photo of the crew. They had indeed succeeded in getting the entire crew together on deck for a photo, and had even convinced everybody to wear a joint ?look?. Above the gathered crew, the ship?s name appears as a connecting element.
Anybody who?s had experience in taking group photos knows how much trouble the crew put into this photo composition. At first glance one might think: ah, just another group photo! Wrong! This photograph shows companionship, in the truest sense of the word.
We hope that the crewmembers can make good on their promise to stop by DUCKDALBEN on their next stay in Hamburg and write their names on the photo. During their first visit, there simply wasn?t enough time.