A Round Goodbye Present 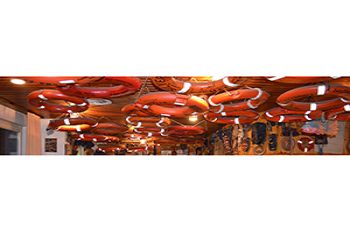 A Round Goodbye Present

Olaf  Club  0  31.August.2016
A panoply of bright orange lifebuoys hangs from the ceiling of the DUCKDALBEN clubroom. In fact, over the years they have become so numerous that they?ve now taken over the large entry hall as well. Every lifebuoy has its own story, but representative for the many others, here?s the story of one of the first we were given, sometime around 1993.

Whenever the bulk carrier Mosel Ore docked at Hansaport, the crew flocked to DUCKDALBEN. The sausages tasted so good that they weren?t only consumed in large numbers in the club, but many cans were also taken back to their vessel. The ship was soon given the nickname ?MS Sausage?.

The sausages weren?t the only highly popular items. The entire crew, Spanish and Filipinos, also went wild over the German Bier in flip-top bottles. No other beer would do! Our entire stock of beer was often quickly and completely wiped out. Back then, before our large building expansion was completed, beer and other supplies were stored in a small shed where the billiard room now stands, and the storage capacity was correspondingly limited.

Lutz Leschke, a conscientious objector doing his community service in DUCKDALBEN at the time, remembers how he often had to rush in a VW bus to a beverage shop in nearby Harburg to replenish our stocks of flip-top beer. We simply couldn?t leave the crew of the Mosel Ore sitting high and dry!

Some time later the news came that the Mosel Ore would no longer be calling on Hamburg. As a farewell gift the crew presented DUCKDALBEN with a crew photo ? framed by a lifebuoy with all the crewmembers? names. Incidentally, the long-haired ?giant? in the middle of the photo doesn?t belong to the crew. He?s DUCKDALBEN director Jan Oltmanns ? at a somewhat younger age.