A Treasure from Switzerland 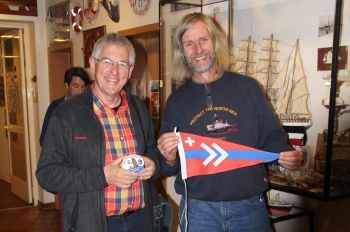 A Treasure from Switzerland

Olaf  Club  0  31.August.2016
?Switzerland? and ?boating?? for me those had been terms from two widely differing areas. But the pennant hanging in DUCKDALBEN shows that a special relationship does indeed exist.

Members of the SSK-CSE (Schweizerischer Schleusenschiffer Klub ? Club Suisse des Ecluseurs) presented the pennant to us in the fall of 2013. Their Website informs us that,

?The club is an anchorage for everybody who is underway on Europe?s more than 45,000 kilometres of rivers and canals. It has more than 650 members distributed across all of Switzerland. Around half own their own boat, from trailer-borne cabin cruisers to converted freighters. We are an association of single persons and couples ? who pursue boating on canals, rivers and lakes as a hobby. (see www.ssk-cse.ch).?

An outing brought some of the club members to Hamburg in 2013 and since then, their pennant has been hanging above the door to our Pump Room, next to the scarf and biblical quotation from the German Protestant Church Conference.

Our thanks to Switzerland and Andrej Jäger, the club ?treasurer? who helped provide us with extensive information!