A Treasure in the Room of Silence 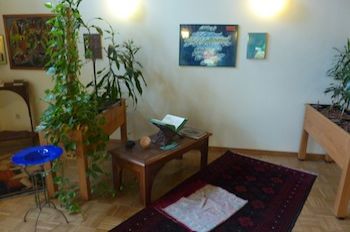 A Treasure in the Room of Silence

Schatzkiste  0  24.June.2019
When the DUCKDALBEN chapel ?Room of Silence? was first furnished, Ju?rgen Bielfeldt was the chairman of the German Seaman?s Missions. Through his son-in-law Samih he had met Salameh Janini, a calligrapher from Madaba, Jordan. Janini was commissioned to create an artwork for the ?Islamic? corner of our chapel. He selected the text from the first Surah in the Quran, the so-called Al-Fatiha. The Fatiha is an often-spoken prayer, for example at the beginning of every five daily compulsory prayers.

The size of the calligraphy and the harmony between the colours of the figures and the background reflect the special importance of the message, even if one can?t read the contents. When I first saw the picture and wondered what the text could possibly mean, I spontaneously thought of the sentence about the story of creation in the Bible: ?And the Spirit of God moved over the water.?

Arabic texts are read from top to bottom, and the respective lines from right to left. Translated, the Al-Fatiha reads:

In the Name of God, the Compassionate, the Merciful

Praise be to God, Lord of the worlds!

The compassionate, the merciful!

King on the day of reckoning!

Thee only do we worship, and to Thee do we cry for help.

Guide Thou us on the straight path,

The path of those to whom Thou hast been gracious;

with whom Thou art not angry, and who go not astray.