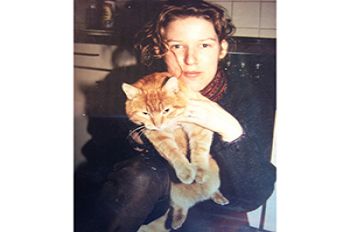 Marco  Club  0  27.November.2015
One day he was vanished without a trace from the DUCKDALBEN.
For days everyone looked for him. Did he become a victim of poisoning? Or did his life found a sudden end below the wheels of a big truck? The worst was expected by everyone.

But someday ? well, it was 86 days later to be exactly ? he proudly went through the DUCKDALBEN?S door, followed by a seaman. He was hardly to recognize as he had become rather fat since his disappearance. But his typical red hair covering was very characteristic: It was him, ?Kalle?, the male house cat! The good news about his return to the seamen?s club spread like wildfire and caused all sorts of speculation concerning his remaining during all the time!

Fortunately, the seaman had the story!
It was himself who kidnapped Kalle during his last visit in the DUCKDALBEN.
From that moment he saw this beautiful animal it was all over him. He wanted to have this cat!!! So he snapped Kalle in an unobserved moment and smuggled him on board in a bag.

But it was absolutely forbidden to keep animals there. Of course the captain got wind of the unbidden voyager in a short time. But the ship was already on the high sea!
Well, what should they do?

The seaman found himself between the devil and the deep blue sea: Either the cat will be thrown overboard straightaway or it would be him who had to leave the ship at the next port! The seaman made a promise to the captain that he would bring back Kalle to the DUCKDALBEN as soon as the ship will be back in Hamburg again.

And so it happened, that Kalle made a journey from Hamburg to Japan and back again and was spoiled with goodies in the meantime (the cook made a proposal for more food and had success?)

But, what a pity! Kalle remained silent if he was seasick on board sometime?to this day no one knows?