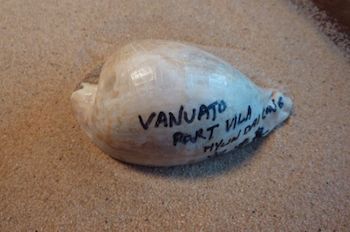 Schatzkiste  0  24.June.2019
Whenever we hear the term ?dream destination? many can immediately think of a place we are longing to visit. For me, ?Vanuatu? was such a dream, but my plans to one day visit this island nation in the South Pacific were never fulfilled.

So when I was walking past one of the glass cases in the DUCKDALBEN entry hall and happened to look inside, I nearly stumbled and stood there like under an electric shock. Lying there was a snail shell not quite as large as my fist, and written on its rounded back in bold letters was VANUATU. When I turned the shell over I felt that the snail was looking at me with a questioning expression. i

It turned out that this is an example of a fully-grown (9.9 cm) Cypraea hesitata, a rare, relatively large specimen of cowry snails. They?re mostly found in water 100 ? 200 metres deep, from the western coast of Australia to Tasmania.

How on earth did this snail ever get here? There has to be an answer! But regardless of whom I asked in DUCKDALBEN, no one could tell me how and when the shell arrived in our glass showcase. Our database listing the home countries of visiting seafarers also didn?t help, because a seaman from Vanuatu had never come to our club.

Hyundai Cong was also written on the snail?s back. I thought that this must be a ship?s name, so I searched the Internet but found only the names of car models. There were several ships listed under ?Container Ship Hyundai? but they all had different surnames, and ?Cong? wasn?t among them. Furthermore, there was no ship with this name contained in the extensive DUCKDALBEN ship statistics that we have been keeping since the club first opened.

Finally, I looked at the three Chinese characters on the bottom of the shell. A Chinese seaman who happened to be in the club translated the characters and told me that it was a person?s name: Song Hao Feng. All of the other writing on the snail?s shell presumably also came from Song Hao Feng, because they were written with the same waterproof pen. This was helpful, but didn?t solve the puzzle surrounding the treasure?s origin. That?s a pity; the riddle will probably remain unsolved forever ? unless someone who reads this story can provide the answer. That would be ? in Bislama, one of the official languages on Vanuatu ? ?gud tumas?.