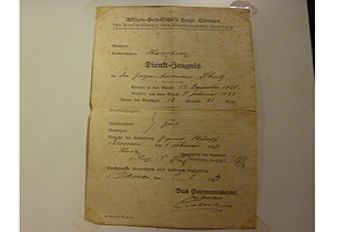 Olaf  Club  0  31.August.2016
While poking through the glass showcase next to ?Office A? I discovered a true treasure: unremarkable, darkened brown, dog-eared and covered in dust. Several small and smaller ship models were perched on them, high and dry as it were. I only discovered them by accident and felt a bit like the angler who doesn?t know if he has an old boot or a gold nugget on his hook.

After I?d dusted them off they still looked pretty inconspicuous, these four old seamen?s record books that I had more or less hauled on land. They turned out to be a genuine treasure, because they all bear the name of the ship carpenter Theodor Hermann Thode, born on April 7th 1876 in Kiel. They provide a fascinating, unbroken look at his many voyages from May 25th 1894 to June 10th 1911.

As seamen?s record books normally aren?t open for general reading, here are a few details I took from the volumes?:

? 25 voyages on 13 various ships in 17 years
? The first voyage on the sailing vessel Artemis: from Hamburg to Mazatlan, San Blas, Guaymas, Vancouver, Valparaiso, Iquique, Hamburg. Length 19 months and 19 days. Wages 60 Marks a month.
? After five voyages on sailing vessels the first voyage with the steamship Hochheimer from Hamburg via Barry, then to La Plata and back. Wages 80 Marks a month.
? Longest service on a ship: niine voyages with the Ockenfels from 1904 to 1907.
? Longest voyage 20 months, 24 days with the Rheinfels: Hamburg, England, India, America, India and back, September 21st 1907 to June 14th 1909. Wages 105 Marks a month.
? Longest break between two voyages: two months and 11 days, shortest pause three days, for an average 18 days pause between voyages
? The last voyage on the Stolzenfels: Hamburg, India, New York, India, Hamburg, August 25th 1910 to June 10th 1911; nine months, 16 days. Wages 105 Marks a month.
? Attached service testimonials certify the seaman?s very good proficiency, describe his general conduct as very good/praiseworthy or commendable, and his sobriety with unfailing/very good/perfect/constantly proven/praiseworthy or commendable.

Between the pages of Theodor Hermann Thode?s last seamen?s record book we found two further documents. One indicates that he was employed as ship carpenter on the Hansa from June 19th 1911 to January 23rd 1915. He was discharged due to ?shortage of work?. From his party membership card we can infer that following a lapse of many years, on September 1st 1945 Theodor Thode (by now 69 years old) rejoined the SPD political party, after having been a member from 1910 to 1933. This is all that we could find out about Theodor Thode. Many years later, his family generously donated the record books to DUCKDALBEN.

By the way: through the Marine Labour Act which went into effect on August 1st 2013, seamen?s record books and inspection were abolished.