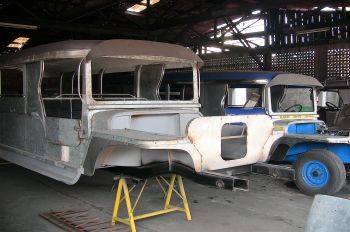 Olaf  Club  0  19.April.2017
It was on a Sunday afternoon in June 2016: a small delegation from the Hamburg German Seamen?s Mission was participating in a conference in Manila. An hour-long tropical deluge had drenched the city. From the balustrade of the National Museum, DUCKDALBEN director Jan Oltmanns looked down on the busy street below. After the deluge, it looked more like a broad river. A bustling fleet of vehicles ploughed their way through the water, throwing up rolling bow waves. Horse-drawn wagons wormed their way between cars, pickups and lorries. But one type of vehicle stood out: boxy and brightly painted, with ornately-decorated grills and a wide opening at the rear: symbols of an ingenious recycling ? from jeep to jeepney.

When American troops left the Philippines at the end of World War II, they left behind hundreds of surplus jeeps. Since a public transportation system barely existed, the idea to transform the old jeeps into small busses was a clever solution. The jeeps? frames were cut apart and extended with heavy steel beams, and the new vehicle strengthened and lengthened into a bus capable of transporting multiple persons. The jeepney was born. Today, creativity knows no bounds when it comes to decorating the grills and bodies with chrome and gaudy, vibrant colours.

And what did the very first jeepneys look like? The model jeepney parked in the glass case in our large entry hall provides a clue. Back then, nobody could have imagined that the original four-seater jeeps made by Willys Overland would one day turn into mass transport vehicles carrying up to 24 passengers. For years now, the jeepneys have been constructed on frames supplied by the Japanese carmakers Isuzu and Toyota. Usually equipped with powerful stereo systems, they scurry all over the islands and are a symbol of the Filipinos? love of life and creativity. They are also a source of income for many persons. Resistance to government plans to outlaw all jeepneys older than 15 years, which no longer meet environmental or safety standards, predictably met with stiff resistance. Hopefully new technology and modern vehicle design can succeed in reinventing this unmistakable cultural symbol of the Philippines. For example, as an E-jeepney.

Nobody remembers when and from whom we received the ?primitive jeepney?, but years later it still brings a smile to the faces of all those who discover it resting in our glass case.