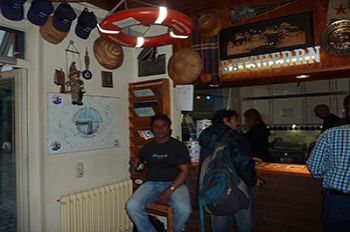 Olaf  Club  0  31.August.2016
Whoever sits at the bar enjoying his beer in the DUCKDALBEN clubroom probably isn?t aware that he?s sitting in the ?hats off? section of the club. Most visitors never take notice of the colourful collection of headgear fastened to the walls above ? easy to overlook because they?re out of the way and mostly in the shadows. One day, however, a seaman from the Ukraine noticed the collection of headwear, and had an idea. An idea that he simply couldn?t shake.

He returned to his ship and soon went on home leave. It was quite a while before his ship again called on Hamburg. And when he visited DUCKDALBEN, he brought more than a present along ? he came with a treasure. The seaman told our volunteer Max, who had spent a 2009/10 gap year in DUCKDALBEN, that his father had formerly served with the Soviet Navy. The seaman?s sincere wish was that his father?s parade service cap could join the other hats and caps hanging above the bar. And the parade cap has hung there ever since.

Hanging directly beneath the service cap is a printing plate showing a proud four-master under full sail. The plate also hangs more or less in the shadows. This ship portrait captured my curiosity. Using a magnifying glass I was able to make out the characters PY-07-02 in the middle of the ship?s hull. And with the help of a flashlight and loupe I discovered that the ship?s name was written on the bow in Cyrillic: ????????????. In other words, the Russian sail training ship, the four-masted barque Kruzenshtern named after the German-Baltic captain and Russian Admiral Adam Johann von Krusenstern. A short time later Oleg, a seaman from Sevastopol, was able to provide information about the vessel?s designation. The Cyrillic letters PY correspond to our RU and stand for Russia. The 07-02 deals with an identification number.

Two unanswered questions still remain:
? Where or from whom did the printing plate with the Kruzenshtern come from?
? Is it coincidence, or intention, that the Russian parade service cap is hanging directly above the barque Kruzenshtern?