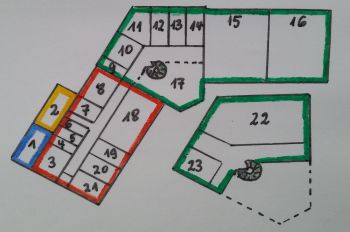 Schatzkiste  0  24.June.2019
DUCKDALBEN?s ?hidden treasures? ? every one is a keepsake. It?s not always easy to uncover their secrets, and describing their stories in just a few words is nearly impossible. Especially when the story concerns the 30-year history of DUCKDALBEN. Nonetheless, the architects? floor plans can give us an idea of the club?s expansion over the years.

It all began in 1986. A barracks building (shown in red) located in Waltershof, in the middle of the rapidly expanding container port, was rebuilt into a new seamen?s club. Initially used as a rail maintenance depot and later as offices by the forerunner to today?s Hamburg Port Authority, it was a simple brick structure and designed for 15-20 visitors daily. After only a few months, around 60 persons were visiting us every day.

In 1994, generous financial support from the ITF enabled us to add a large extension (green). Since then, solar cells for warm water heating and a rainwater harvesting system have helped support our commitment to the environment. A stonemason from nearby Harburg crafted a ?cornerstone? which stands between Office B and C; an ecumenical ship is carved as a bas-relief in the middle of the brown sandstone. Set in the wall is a collection of historical objects ? old newspapers, money, mementos showing the history of Waltershof, an old DUCKDALBEN flyer. The photos above show Bishop Maria Jepsen setting the cornerstone on September 2nd 1994.

The spacious entryway contains several telephone booths for undisturbed conversation and connects the old structure to the billiard room and adjoining hall. A spiral stairway (grey) leads to the Room of Silence chapel, where a special emphasis was placed during planning and construction on soundproof insulation. The major addition was opened on August 28th 1998. In 2003 the winter garden and library were also added (yellow).

The adjoining Office M (blue) opened in June 2015 as the tentatively last expansion. The sports field had already been completely overhauled in 2013.