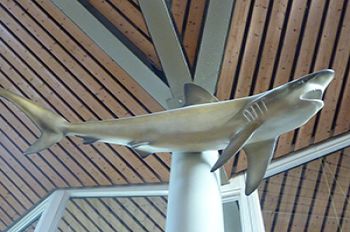 Olaf  Club  0  31.August.2016
Some of the most fascinating treasures are those that tell how our volunteers first discovered DUCKDALBEN.

Charlotte Schulz-Wolfgramm, for example, had studied ethnology and met our colleague and ethnologist Dirk (Diego). Through Diego, she joined DUCKDALBEN as one of our earliest volunteers. Charlotte had travelled the world and could tell the most fascinating stories. And during an Advent party she surprised the entire DUCKDALBEN crew with an exceptional present that today numbers among our oldest ?treasures.?

In 1979, Charlotte and her son had caught a shark off the Florida coast. She later had a deceptively real-looking copy made, together with the wooden sign ?The Shark/Miami, Florida/caught and donated by Charlotte und Eibo Schulz-Wolfgramm?.

This present was of course an absolute sensation and the topic of conversation at that year?s Advent party. And when leaving the celebration, no one failed to wish each other a ?Fröhliche Hainachten?, a German play on words roughly translated as ?have a Merry Shark-Mas!?

Later, the shark did go on another, albeit short trip. He was loaned out to ?Apetito,? the caterer of the neighbouring Eurogate Canteen, to help decorate their Maritime Week.

Every time that I walk through the DUCKDALBEN entry hall, it seems that the shark, suspended from the ceiling, is watching me and hungrily licking his lips. Possibly because one day, the tin of sardines that was stuck between his teeth for years fell out and has never since been replaced.

We named the red VW Caddy that we use daily for ship visitings ?Lotte?, in honour of our dear and departed friend and volunteer.