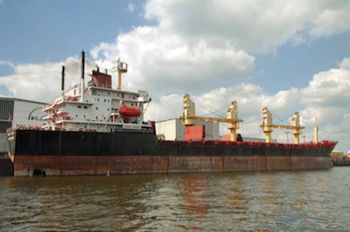 Olaf  Club  0  31.August.2016
For nine long months in 2009 the MV Jaco Triumph lay immobile, moored to the MAN quay, located near the Hachmann wharf. The diagnosis: severe motor damage. On board: a purely Filipino crew.

Thanks to our volunteer ships? visitor Werner, contact to the seamen?s mission was quickly established. For some of the crew, for the coming nine months DUCKDALBEN would turn into a second home. A relationship was created that grew continually closer through a city sightseeing tour, a private garden party, and even occasional parties on board the MV Jaco Triumph for members of the DUCKDALBEN team.

During their visits to the club the crewmembers always loved playing basketball. They gave their team the fearful name ?the barracudas?. Today, nobody knows why they happened to choose this title.

When it turned out that the repair time would be much longer than originally expected, part of the crew was sent home. And when repairs to the motor were finally finished, first the ship couldn?t find a cargo, and then the shipowners went bankrupt. Finally, the ship was sold to an unknown Greek investor. The remaining Filipino crewmembers were mustered out and a completely new crew, composed mostly of Pakistanis, went on board in August 2009. A lively party was held in DUCKDALBEN to bid farewell to the departing Filipino seafarers. And as a goodbye present, they had a large towel printed that will always remind us of the plucky Team Barracuda.

For your information:
The razor-sharp teeth on the barracuda?s lower jaw tear large wounds that lead to a major blood loss. However, the barracuda only bites once and then swims away.