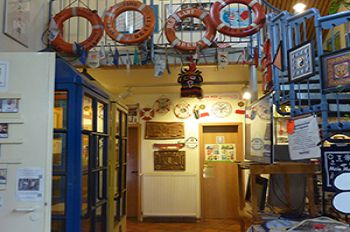 Olaf  Club  0  31.August.2016
Most seamen enter DUCKDALBEN through the doors leading to our large entry hall. But if they happen to look up, what might the seafarers possibly think when they discover a scary-looking mask staring down at them from the gallery? Is he friendly or frightful? Is he really sticking out his tongue? Is he a good spirit, or does he have mischief on his mind?

Fortunately we know the answers. The colourful knitted mask is the ?Diablo Huma?, Spanish for the ?Huma devil?. He is the central figure at the ?Inti Raymi?, or Inca sun festival, that is held every year in the Andes to celebrate the winter solstice ? the shortest day of the year in the southern hemisphere (between the 20th and 23rd of June). At these festivals, the indigenous peoples pay homage to the goddess Pachamama, the ?mother earth?, and express their thanks for the harvest and for the sun that ripens the crops.

A man wears the Huma mask at the Inti Raymi, and during the traditional dances the Diablo Huma has the leading role. He embodies supernatural powers and represents the living energy of nature. He is likewise the spiritual power that protects and maintains the myths and legends.

When the Spanish conquistadors came to Latin America, indigenous religious beliefs became mixed up with European words like devil, Lucifer or Satan. In this way, the Huma was given the byname ?devil?, but without the negative connotation that the term has for us.

How did this mask from Ecuador arrive in DUCKDALBEN? In August 2013 Ricardo Vizuete from Quito arrived in Hamburg to spend a year in DUCKDALBEN under the auspices of the ICYE (International Cultural Youth Exchange). When he arrived, he impressed us with his good command of the German language that he had gained at the Goethe Institute in Quito. When he returned home, he surprised us with the Huma mask as a going-away present.

A native woman from a small village in the Andes had crafted the Huma from wool, and Ricardo bought it from her during an Inti Raymi. He presented the mask to us with the words, ?instead of watching over the fields and gardens of villages in the Andes and warding off danger, this Huma should watch over all seamen who visit the club, and those who work there, and protect them all from harm.? The Huma is admirably suited for the task, because he can also see everything that takes place behind his back. A closer look at the Huma mask shows why.