The Cross on the Globe 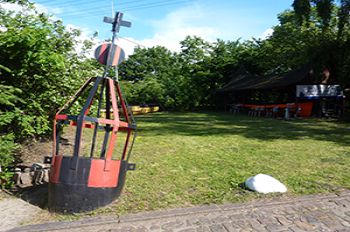 The Cross on the Globe

Olaf  Club  0  31.August.2016
DUCKDALBEN director Jan Oltmanns could hardly believe his eyes. It was around the year 2000 while he was paying a visit to the Hamburg Harbour Police School. On the school grounds was a buoy that he?d never seen before. The buoy?s top showed a globe surmounted by a cross. He was astonished, ?that?s the traditional symbol for the German seaman?s mission; that would be perfect for us.? And somebody was listening to his words. For space reasons, the buoy was scheduled to be ?recycled? and it was immediately clear to all that its future location could only on the Zellmannstrasse, the location of DUCKDALBEN.

Since then, the buoy has stood watch on the left-hand side of the entrance to DUCKDALBEN. But what message was it originally supposed to tell seamen? Neither the Internet nor Meyers Conversation Lexicon from 1906 ? usually an abundant source of information for me ? provided an answer. However, my copy of the Hamburg School Atlas from 1969 did show a similar beacon buoy that marked the junction of the Este and Elbe rivers, but which had a diamond above the globe.

Finally, our inquisitive volunteer ?Santa Klaus? found the solution in a 1977 book for pleasure craft skippers. This revealed that buoys like ours mark the confluence of two equal channels. And our ?bookworm? Wolfgang L. provided the information that such beacons mark the end of ?Middle Ground? ? an elongated sandbar in the mouth of the Elbe.

To the left of the DUCKDALBEN entrance a beacon buoy with the old symbol of the seaman?s mission, on the right an anchor with the present-day symbol, recovered from the river bottom in front of Blohm + Voss ? accident or fate? In any event, it was for me quite a surprise.

By the way: the colour schemes of buoys were changed in 1982 from black and red to green and red. The shapes of the buoys were also changed.