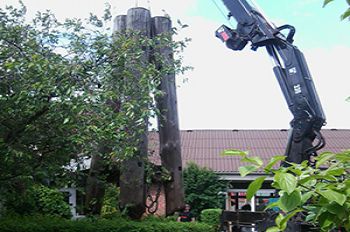 Olaf  Club  0  31.August.2016
When our club opened on August 13th 1986 the ?Amt für Strom- und Hafenbau? (today the HPA: Hamburg Port Authority) erected a structure bearing the name of our club, namely, a Duckdalben (English: dolphin). The dolphin had formerly seen service in the Billwerder Bucht. The ends of the wooden posts were buried in the earth, but by 2013 the duckdalben was threatening to collapse; the buried wood had decomposed and become rotten. A crane lifted up the duckdalben and hauled it away.

Around the same time, the HPA and the Taucher Knoth (?Diver Knoth?) company were busy removing worn-out duckdalbens from the port area. One of them, a four-legged ?quadruped?, was scheduled to be erected on the Town Hall Square as part of the German Church Congress. The posts were properly prepared, but the duckdalben still didn?t meet the demands of the congress? safety experts. One of our volunteers, Diver Klaus, heard of the unwanted duckdalben and quickly organized a flatbed truck for transporting this newcomer to DUCKDALBEN. Reinhard, our Hausmeister, built a solid foundation where the ?new? duckdalben was erected. The old structure bearing our name thus unexpectedly and quickly found a successor.