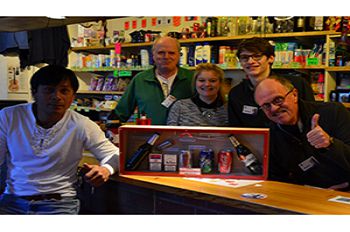 We all know how hard it is to find a present for someone who already has everything. Some of the crewmembers of the ?Cap San Marco? had often been in the club, and decided to give us a present during their next visit ? a present that would be different from all the other gifts on display in the club. In other words: unique.

How long must they have pondered, deliberated and rejected proposals until they finally came up with a fantastic idea: an ?Emergency Box?. An emergency box for everybody who works at DUCKDALBEN. And not just for a temporary, but also for the permanent solving of all problems! The box also helps relieve stress and quench thirst as well.

What a brilliant idea! And how much fun must the seamen have had, until they had found something for all ?emergencies? and every item had found its proper place in the box.

The photo showing seaman J. Caranono presenting the Emergency Box in our clubroom on March 22nd 2015 proves that their present was a complete and total surprise!

I believe that merely knowing that DUCKDALBEN has such a box for all eventualities might be the reason that even despite the occasional crises in the club, it?s never been necessary to follow the instructions, namely:

IN CASE OF EMERGENCY: BREAK THE GLASS!