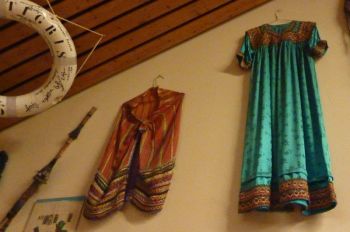 Schatzkiste  0  24.June.2019
Our volunteer Ursula still clearly remembers: it was a Tuesday when she first met the crew from a bulk carrier from Algeria that was moored at Pier 80/81. Tuesdays were her regular day for making ship visits, back then in Autumn 2001.

On board, the disappointment was everywhere. The accompanying wives and children had been looking forward to shore leave and sightseeing in Hamburg, but the strict regulations that had been introduced immediately after the September 11th terrorist attacks and were in effect for the entire port area had ruined their plans. Shore-leave papers were only given to the crewmembers; nobody else was allowed to leave the vessel.

Ursula therefore decided to visit the family members every day on their ship. She ran errands for them and brought along homemade cakes. Once she even smuggled the wives from the vessel to our club in a DUCKDALBEN bus.

During these few days a warm relationship arose despite the difficulties in communication. After the cargo had been discharged a few days later it was hard to say goodbye. As a way of expressing thanks one of the women, from the port city of Oran, gave Ursula a package containing a very personal present. And ever since, the richly decorated Algerian festive gown and accompanying shawl grace a wall in our billiard room.