They first appeared in the DUCKDALBEN clubroom ? these life buoys from ships all over the world. They took over the entire ceiling until it was full, then spread out across the whole entry hall, and are now moving into the billiard room as well. Most are bright orange with reflective tapes and all-round grab lines with the ship?s name and port of registry, many bearing the crewmembers? signatures, some with the date, and one is covered overall with postage stamps and the notation: ?A present for the world best seaman?s club DUCKDALBEN from Captain Heinrich Neumann?.

One of the first persons to design a life buoy (above all for the military) was Leonardo da Vinci. For material, he chose waterproof leather that could be inflated in an emergency. His design soon went into production and today can be found displayed along with his other inventions in a museum in his hometown of Vinci. The development of materials progressed from cork and polystyrene up to the life buoys that are today made of polyurethane and mostly produced in Asia.

On several occasions I enjoyed watching the crewmembers? proud and happy faces, and hearing their words of gratitude, when they presented their life buoys to us. Several times I started counting the (large) life buoys in the club, but I always lost count. Only after I had listed them all in a table was I able to verify their exact number: As of December 2015 there was a total of 81 such treasures, and a special thanks goes to the crews of the ships who so distinctly decorated our club: 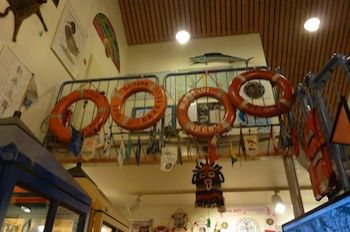 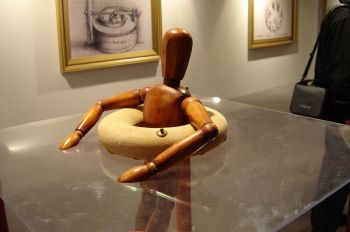