We encounter them in airports, hospitals or train stations ? signs directing us to a chapel, a ?Room of Silence? or ?Prayer Room?. On the circular stairway in DUCKDALBEN?s large entry hall, seven ?signposts? guide the visitor to our multidenominational chapel, our own ?Room of Silence?.

These symbols (from lower right to upper left) represent the seven religions that are most often practiced by the seafarers who come to our mission:

The CROSS stands for Christianity with its variety of Orthodox, Roman-Catholic and Protestant beliefs.

The SEVEN-LAMP LAMPSTAND, the Menorah, represents the Jewish religion.

The CRESCENT MOON AND STAR is symbolic for Islam, as Muslims practice their religion according to the lunar calendar.

The WHEEL OF THE DHARMA is the best-known symbol of Buddhism and represents the Eightfold Path that leads to Nirvana, the ultimate goal of the Buddhist belief.

The SACRED SOUND ?OM? is the most important symbol of Hinduism and stands for life, for becoming and expiring, and for connecting mankind with divine power.

The KHANDA SYMBOL stands for Sikhism. It is composed of four symbolic weapons that represent the four pillars of the Sikh religion.

The YIN AND YANG symbols represent Taoism, one of the major Chinese spiritual, philosophical and religious traditions.

If one follows the signposts up the stairway, he is drawn to our bright, sunny chapel where every religion has its own, individual ?prayer niche? or altar. There is also a corner for ethnic or animistic religions.

Peaceful coexistence of the religions in our Room of Silence and a friendly companionship of all the nationalities in our other rooms ? this is commonplace at DUCKDALBEN! And this is possibly the most precious of all our ?treasures?. 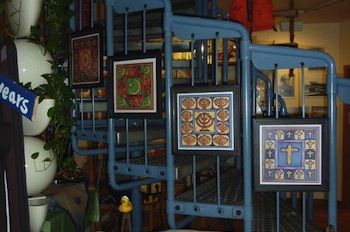 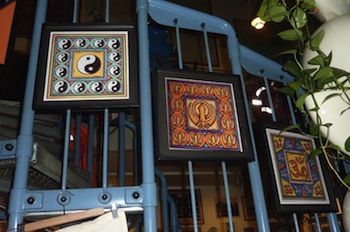