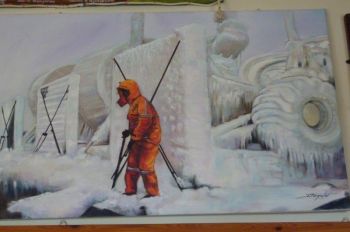 Schatzkiste  0  24.June.2019
One of the walls in our billiard room is filled with pictures showing romantic tropical landscapes ? and in the middle is a painting of an iced-over ship that literally radiates coldness.

I had heard about the harsh, frightful conditions during a winter voyage on the frozen Baltic, but no one could tell me how the painting made its way to DUCKDALBEN. One day, by pure chance, I discovered a photo in the Internet that was a perfect copy of our painting. I could hardly believe my eyes. How was this possible?

The picture is from a photo series that shows the MS Anna Sirkka during a winter voyage to St. Petersburg. This wasn?t all that great a help, but during my next duty in DUKDALBEN I got the tip to contact the ship?s owners. Petra Heinrich, co-owner of the Heinrich Shipping Company and owner of the Anna Sirkka, immediately answered and referred me to Captain Claus Sprengel, who was currently on the Page Akia but had formerly been on the Anna Sirkka. His answer also arrived without delay:

picture shows a seaman chipping off ice on deck, after we had passed through a storm with -20° celsius and the spray on deck had frozen (called icing). i had the photo painted in brazil and gave it to duckdalben in the name of our company!

The painting was presented to us in 2013.

For a long time I had puzzled over the painting that so impressively shows the hard, dangerous, work of the seafarer. Thanks to the support of all involved parties and naturally also to modern communications, it was possible to unravel the story in a matter of hours.